COST EFFECTIVE SOLUTIONS FOR ALL YOUR THEATRE AUDIO NEEDS

Create microphones and accessories for wireless microphone systems; especially those used in school and community theatres. These products must represent the "Value meets Quality" standard we live by.  These products and services will provide similar real world results as existing products at considerable savings.

It all starts in Australia.  While in high school (Wollongong High School - 1971) when Rod helped Peter Kiwi the local sound and lighting guru, set up oil wheels on overhead projectors for a school dance.  Hooked on the technology side of performance he progressed to lighting the garage band started by a group of friends.

On finishing high school Rod applied to NIDA - National Institute for Dramatic Arts- for technical production.  If he had been accepted - he wasn't - he would have been in the same class as Geoffrey Rush and Mel Gibson.

So back to the fallback position - Electrical/Electronics Engineering Honors Program at the University of Wollongong.  Boring! And so student politics beckoned - elected to the Student Council, led a demonstration against the Minister of Education for not processing student grants in a timely fashion.  Rod's conservative (politically and socially) mother was "so proud" when he made the front page of the daily newspaper.

Also while in freshman year at college Rod was invited to join Harvest Theatre - an acting troupe sponsored by the Anglican Church Sydney Diocese - as the tech director.  Mixed in with a little acting - he was not that great - this was enough to encourage him to quit school and concentrate on theatre and earning a living.

A year later Rod was asked by a Gospel Music promoter to provide lighting for an upcoming tour by an US performer.  For various reason he turned this offer down, but the seed was sown.  A few months later Rod pitched an idea for a business to a couple of high school friends.  And so in 1977 was born Trilogy Lighting and Sound Systems.

Over the next 10 years Trilogy purchased a number of other sound companies including Australia's largest installer of church sound systems - Christian Sound Australia.  As they opened additional retail outlets and added a concert sound and lighting division the became The PA People. In 1993 Rod sold his 45% stake in this company and 12 months later resigned as CEO.  Today the PA People still exists as one of Australia's premiere AV contracting companies and a world player in the event communications business having done several Olympic games and other major sporting events from Sydney to Beijing to Athens.

Now footloose and fancy free, but with a serious no compete clause Rod became a restaurant owner - nice little upscale 4 star steak and seafood place on the waterfront.  This was not his best investment ever.  It was great fun, but it was a bit like a swimming pool in the back yard - just a big hole to pour money into.  A few years later he sold the business, licked his wounds and moved to the US to look for opportunities.

What he found was love.  Married a Jersey Girl, and settled down to start a family.  Taking his first job since 1976 - running a sound production company.  That was a disaster as the owner couldn't decide what he wanted to do, so 6 months later he took another job as a hotel Audio-Visual Department Director.  In time this lead to consulting to conference centers in New York, establishing efficient AV operations and selecting staff. Then came the crash - 2007 - and those consultancies disappeared into thin air.

Blame it all on ROD REILLY

With our appointment as US distributor for Studiomaster and Granite Sound, the  release of our RFdevices line of wireless microphones and our partnership with Seiwin we are greatly expanding our activities.

Our focus is still based around the needs of wireless microphone users - especially schools, colleges, performing arts centers and community theatres.  We just believe that we will be able to bring our value meets quality code to other areas of the pro-audio world.

We hope to became a one stop solution for all things needed to better enhance the sound reinforcement access of theatrical performances - mixers with added features like MP3 players and compressors on each channel, compact and affordable line array speaker systems for spaces with high ceilings and vertical line array speakers for smaller more intimate performance areas.

In our opinion any system used to reproduce vocals should not be relying on a speaker larger than 10" and preferably in the 2-5" range.  They sound more natural, and they require less "tweaking" to sound right. Oh and no part of the voice should ever (and I mean ever) be coming from a horn speaker - so any box with a 15" woofer (great for the boom from the soundtrack) and a horn crossed in at 1500-2000Hz has any place in live vocal reinforcement.  It's like driving around town in a Formula 1 race car - it can be a wonderful product, it just isn't suited to the task at hand.  Most current (and the good ones from the past - think Clair S4, PA People V16) touring concert systems use 4-10" drivers to cover the entire fundamental of the voice (300-3,000Hz) - this is why they sound so good.  This principal can be and should be applied to any theatre space - and it doesn't need a million $$ budget.

For information on RFdevices wireless systems - we will publish more information under the Systems link on this website.

For information on a our Seiwin products please check back.  There is some preliminary information at Audio-USA.com 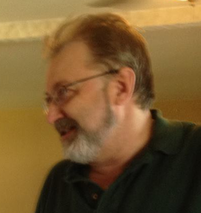 We are always looking for products that can be be manufactured that will perform the required functions at a better than acceptable level of quality and reliability.

What is now bodymics.rentals was created back in 2007 as a wireless microphone rental company offering low cost wireless systems for schools, churches and other community groups.  Over the next couple of years we offered our service nationwide - same rental price, free delivery anywhere in the continental USA.

As we researched various products and became disenchanted about the cost of good headworn microphones, and the lousy quality of the cheap ones on the market; we looked for alternatives that would allow us to rent systems with quality microphones at prices that didn't require a mortgage.  We found a couple of great manufacturers - after trying many different products from vendors all over the world.  It then occurred to us, that if we needed an affordable source of good quality microphones, so did a lot of other people.

With that revelation we began having our own microphones manufactured to our specifications - and so began bodymics wireless bodypack microphones and this website.

In December 2014 we received our first batch of earsets (single ear headsets) in cream with just three connector options - Audio-Technica, Sennheiser and Shure.  Three months later we added the AKG connector option and black earsets, another few months and we added lavaliers and headsets ... check out our timeline highlights. 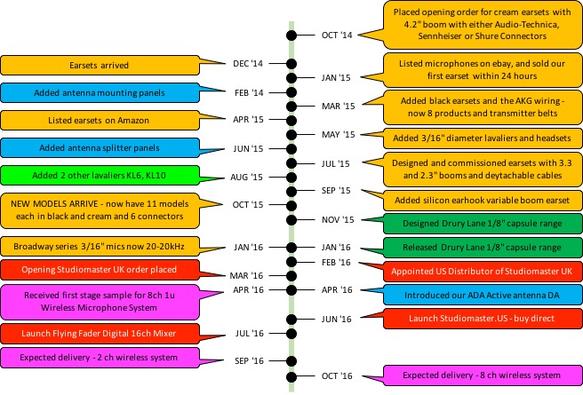